“We had access to nearly 60,000 engineers. We thought we had found the Holy Grail.”

Back in 2004, Notarius had just been awarded the bid for tender for Quebec’s association of engineers (OIQ) to issue digital signatures to its members. Claude Charpentier and the team believed that they had opened up a whole new market that was ready for a major digital transformation, but they had no idea what lay ahead.

Claude, our CEO since 2009, was in it for the long haul, even as the digital shift hit a wall of misunderstanding and mistrust. In the process, he had to manage a sharp decline in revenues after the organization lost a major contract in 2014. Despite it all, Claude pressed on with integrity and determination. Today, Notarius provides digital signatures to engineers from coast to coast and it is fair to say that his many years spent cultivating trust are finally beginning to bear fruit.

Exactly what makes him trust incarnate? What does he see in Notarius’s future? We sat down eye-to-eye with this CEO.

Finding the meaning of IT in nature

Right away, when you talk with Claude, you understand that the person before you has his heart in the right place. As you speak with him, you see his passion for nature, beautiful landscapes, and the calm of the forest.

“Since I was young, thanks to my parents, I have always felt a connection to nature.”

Nestled amongst the trees, Claude finds peace and rest, but also inspiration for his role as president and CEO.

“Nature reminds me that technology must serve humanity and the planet.”

This vision of things is undoubtedly what propelled him to work for Notarius for almost 20 years and to forge our identify as an organization. Claude conveys this perspective of integrity to everyone so that we always try to create solutions that will serve larger causes, such as protecting the public.

With thousands of electronic applications and products coming out every week, Claude helps us stay focused on what really matters.

"My love for IT stems from as passion for the greater good. I’m pretty wary of many things, like the addictive side of social media. Technology must be used for our own good, not make us slaves to it.”

Improving and evolving our company is a major driver for all employees at Notarius. Claude is at the heart of this collective energy. He spent years building it.

“Serving the environment and humanity, knowing that people are safe and sound, motivates me and serves as my impetus to pursue Notarius’s mission. For me, making money is a consequence, not an objective.”

In his early twenties, with a bachelor’s degree in geography to his name, Claude Charpentier became interested in network computing and registered for computer sciences courses. What was then a way to secure a job became a passion, an exploration of a vast, barely explored territory in which he found a personal mission: that of building digital trust.

His professional career began as the networking director at SOCOM which later became Intellia, Informission, and Nurun. An entrepreneur at heart, he worked as a consultant for a few years before accepting a major work assignment abroad.

“I was put on an assignment by Quebecor World Europe to re-do the European network and interconnect printing plants. […] I worked for two years, as an expat, which was a completely new management experience for me. But when my son was born, my wife started to get homesick, and we decided to make our way back home.”

When the dot-com bubble burst in the 2000s, the entire IT field started to undergo a profound transformation. The job outlook was grim.

“It was my accountant who told me about Notarius. […] In 2002, after an interview, I came on as the Director of Technology.”

Claude discovered an organization that was, even back then, serving Quebec’s Chamber of Notaries. In every way, the organization was pursuing his same personal mission of building a safer digital world and protecting the public. His first step as a manager was to adopt a normative framework that would highlight the firm’s administrative and technical rigour.

“When I started at Notarius, we were already a trusted third party, but I wanted to show that people could trust us from an organizational point of view. […] I started to become interested in BS 7799 which later became ISO 27001. We were the first organization in Quebec to be certified ISO 27001 and the fourth in Canada. We were trailblazers.”

In doing so, Claude laid the foundation for the version of Notarius that exists today, a company that offers high-quality electronic and digital signature solutions, backed by rigorous processes. In North America, which is somewhat the “Far West in terms of electronic signatures,” Notarius is an exception.

“Adopting normative frameworks allows us not only to say that we are good, but also to demonstrate it. […] In 25 years, Notarius has had no security incidents related to the issuing of digital signatures.”

Early on in his career, Claude became interested in gaining a mastery over information security. In the early 2000s, he was one of the first people in Montreal to get CISSP-certified, which is now one of the most recognized certifications in information security. He also holds ISACA’s CISA certification, a world-renowned standard of achievement for best practices in IT audits.

“There was a lot of nonsense going on in the IT field, in the early days. […] It didn’t take long for people to start examining the information security framework. I had experience in that area, and we built a strong security team.”

Since safety and standards are constantly evolving, Claude ensures that Notarius is always on the lookout for new industry requirements.

“ISO 27001 is ever-evolving, and you have to adapt and evolve along with it. The second element is our industry-specific certifications like WebTrust CA, AATL, and eIDAS. PKI, HSM, and our signature solutions are at our core, and that is where we put major emphasis on security.”

His rigorous choices have helped Notarius win the respect of professional associations and governments across North America. It is a reputation that was built over 25 years and Claude is one of its pillars.

“There are great management principles that you need to know, but ultimately, managing a business is a human- and business-focused experience. I would not be able to run a company that makes clothes abroad and makes profit margins off the poor conditions of employees.”

Leading with humanity and humility

Claude admits that, at the beginning of his career as a manager, he was very focused on technical aspects and the specifics behind the technologies. As he gained experience, he developed a completely new approach.

“I became a manager who primarily looks after people and their well-being. A company is worth nothing without the talents of its employees. There are people who are far greater experts than me in some areas, and I must have the humility to let them spread their wings.”

As a result, at Notarius, there is a ubiquitous collaborative culture where everyone is free to express themselves fully and is treated with respect. Experts in all fields have the space to express their innovative ideas or enrich new hires.

“I like the idea that a good leader is one who creates other leaders.”

Indeed, Claude is an approachable CEO who always makes himself available, even with his busy schedule. He likes to say that “his door is always open,” although technically, at our headquarters, his office doesn’t even have a door!

“I’m not someone who likes to be put on a pedestal. I prefer to see the group get recognition. The team is what matters. My role is to ensure that everyone’s talents develop for the greater good of the company. […] Hierarchy is my last resort when it comes to management.”

Claude and his management team lead Notarius as if it were their own organization, even though none of them is a company shareholder. For our CEO, the only way to achieve long-term results is to “be guardians of our culture of collaboration and mutual support.”

As proof, Notarius obtained the Remarkable Employer® certification from the Bureau de normalisation du Québec (BNQ) in 2018. It’s safe to say that, somewhere along the way, Claude’s humility played a big part. 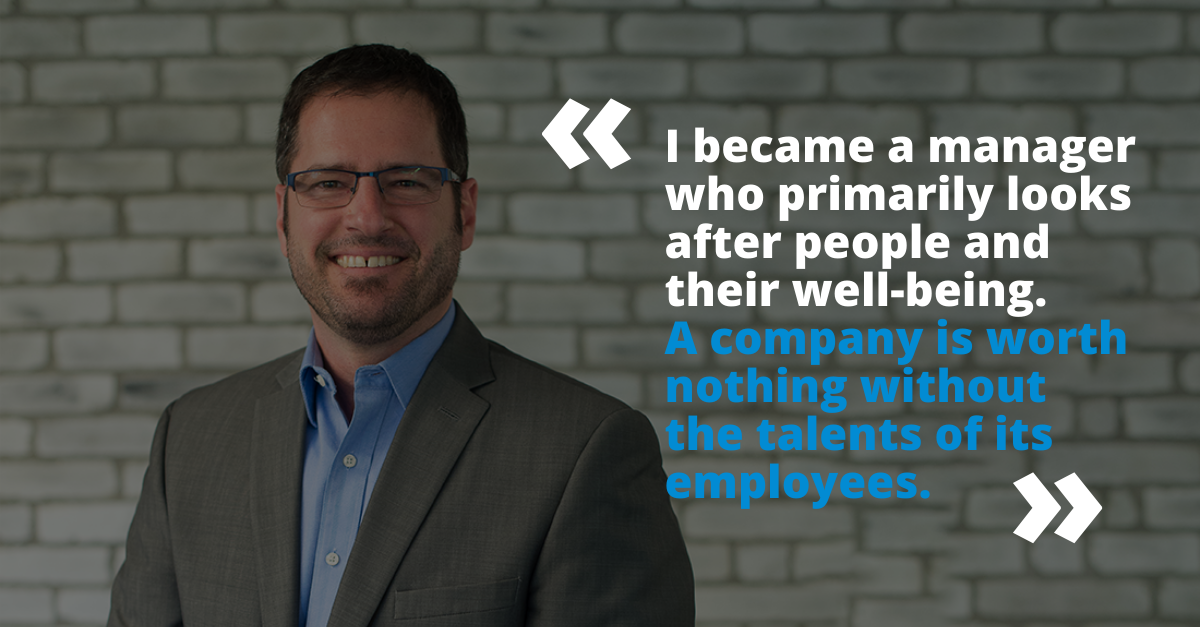 Innovation is in our DNA

“What I am particularly interested in is the entire product portfolio, road map, and vision. I am extremely focused on our positioning.”

When you look more closely at Notarius’s product offering, you can see Claude’s fingerprints all over it. He is committed to providing electronic and digital signature solutions for a range of organizations and individuals to best protect the entire ecosystem.

“We are one of the only companies that offers solutions that integrate signatures providing different levels of legal reliability. […] Only a handful of companies in the world offer such a large range of solutions. If a client wants to go with someone else, they need to use multiple products to get the same result.”

To keep innovating, Claude bears three things in mind: identify future needs, listen to clients, and listen to employees. He notes, for example, the solution that Notarius developed for the engineering industry.
“It’s not just that we won a bid for tender. We asked ourselves: ‘'How can we transform a profession and give it the tools it needs to be more efficient?”

“ConsignO Desktop has unique features for the engineering industry that aren’t offered anywhere else. To provide only the best to the industry, and our other clienteles, we are going to be completing a major overhaul soon.”

In a stroke of genius, it is worth noting that Claude and his team displayed true acumen when they decided to integrate the PDF/A standard (archive format) into the core of Notarius’s solutions. At the time, no one saw PDF/A as an institutional requirement.

“No one ever asked us to put the PDF/A conversion functionality in our tools. […] We knew that engineers produce documents requiring long-term reliability, such as for bridge plans and infrastructure. We were pioneers, and when Quebec’s Department of Transport made them mandatory in 2012, we were ready!”

As another innovation, Claude emphasizes the free-of-charge formatting in PDF/A-3 that allows users to insert attachments, such as 3D files, a process necessary for building information modelling. He also notes the possibility of signing in ConsignO Cloud with electronic signatures offering different levels of legal reliability.

When it comes to Notarius’s future, Claude reports that there are many new developments underway. The next few years will be full of innovation and surprises.

“People are now accustomed to using their smartphone, tablet, and computer. We need to be prepared to offer them reliable and secure signature solutions. […] We have innovated, and we will innovate again. It’s in our nature.”

Staying true to his values

For Claude, there aren’t a thousand ways to run a business. You first need to lead people, and that entails “staying true to your values.” Moreover, he admits that, with experience, he relies increasingly on instinct and his gut feelings.

“Many companies make the mistake of focusing on ROI, whereas it’s a matter of whether or not teams and departments mesh well. So many crises can be avoided, and so much progress can be made when everyone shares the same values.”

In fact, the company now enjoys an enviable reputation across the country thanks to the leadership style that our CEO has embodied for nearly 20 years. With rigour, integrity, and humanism, he has transmitted the level of trust Notarius needs in order to innovate for many years to come.

“I have always been committed to having a clear vision of the direction we’re going. When you see the success we’ve achieved, although it may have taken many years, Notarius is now a flagship of digital trust in Canada.”